Life events happens.  Call it bad luck. Call  it a lesson learned.  Call it what you want.  Dealing with your child getting hurt, and adjusting your routines can be a tough road.

I just smile, shrug and say to myself that “everything happens for a reason”.   You can not stop life, nor change it.  All you are able to do is deal with it as it presents it’s ugly head.

The way you deal with life will make you stronger for what ever other event or situation that arises.  Right?????

The Calm
We were having a wonderful March Break.  We went on a short trip near Ottawa to visit  gramma and grandpa, went skiing, tobaganning, and the movies.  Typical fun for our annual March Break. We came back home to rest and relax.  We often do not do a whole lot during March Break because in GTA– it is busy every where. When you go somewhere with five kids, you tend to opt for laid back.

On our last day of March Break, after not doing very much, I decided to take the five kids plus one of my older son’s friend skiing an hour north of Toronto. The weather was milder, and hey- can’t say I don’t do anything….  Since my hubby was working, I took my mother.  She hates snow and cold, and reluctantly agreed.

The Chaos
I  had to enroll all six of the kids by filling out a form… for each…  Gather four ski boots, four helmets, and four ski’s, while my mother watched a table with our lunch and snacks. I got the 7 and 6 year olds off to their 930 private lesson. Then the twins to their 10 o’clock lesson.  My back, and armpits were totally sweaty.

Finally, I got to sit and have my coffee, but not for long.  At 1030, I would have to pick up the first two, so I had to repeat the process for myself.

When I arrived at 8am, I was the second in line.  Now.. at 10am, there was probably 50 people in front of me.  Two hours.. no thanks.   This meant I could not ski with my youngest.

Plan B.  You always have to have a plan B.  And C.  Since I was not able to get my stuff on in time to ski, I sent the seven year old with my sons friend and my 6 year old with my oldest.  Just to go down a couple green slopes to make them happy.

My seven year old skis black diamond. Which is the most difficult, more steeper slope.  I am never able to follow him anyway.  I have tremendous fear. My hubby usually skis with him or my oldest son.

The Storm
Ring.. ring.. my cell goes off.  It is my son’s friend telling me that my seven year old fell.

Me, being the nurse that I am, was very calm and collected.  As an ER, you shouldn’t really panic in front of your patients..right??
I said “ok- is he ok?”.  The friend said, “he cried for a little, but is ok”, “but they want you over here”… -Whhhhhat who wants me??  and Over WHERE??!?

Now I was starting to get worried.   I arrived to the bottom of black diamond where I saw my son sitting on the bottom of the ski hill, my sons friend standing beside him and two red jackets.

I greeted my son, and asked if he was ok.  He was not crying.. that was a good sign.  However, the look in his eye.. a mother can always tell.. He was scared as hell.   I asked the red coats how it looked and they said it was hard to tell- of course… snow pants, ski boots… really nurse mom??

They called the snowmobile medic over to transport my son to the first aid house.   I followed them over. 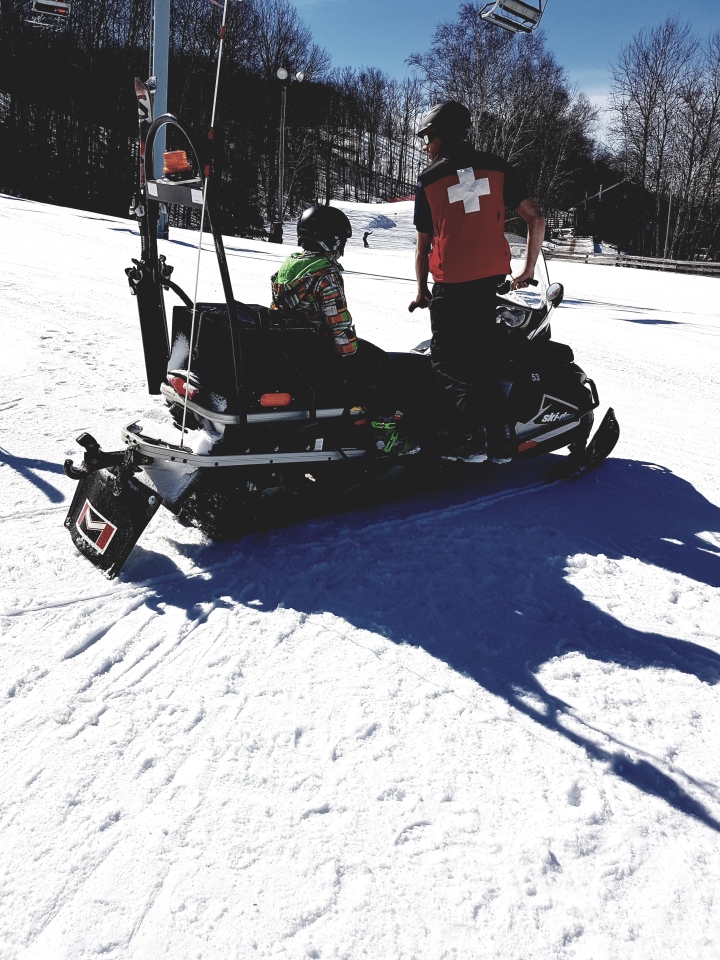 By the time I got to the house, my son had this huge cardboard contraption on his leg.   After an hour of paper work, the medic was trying to ask me how I was going to get my son to the hospital. 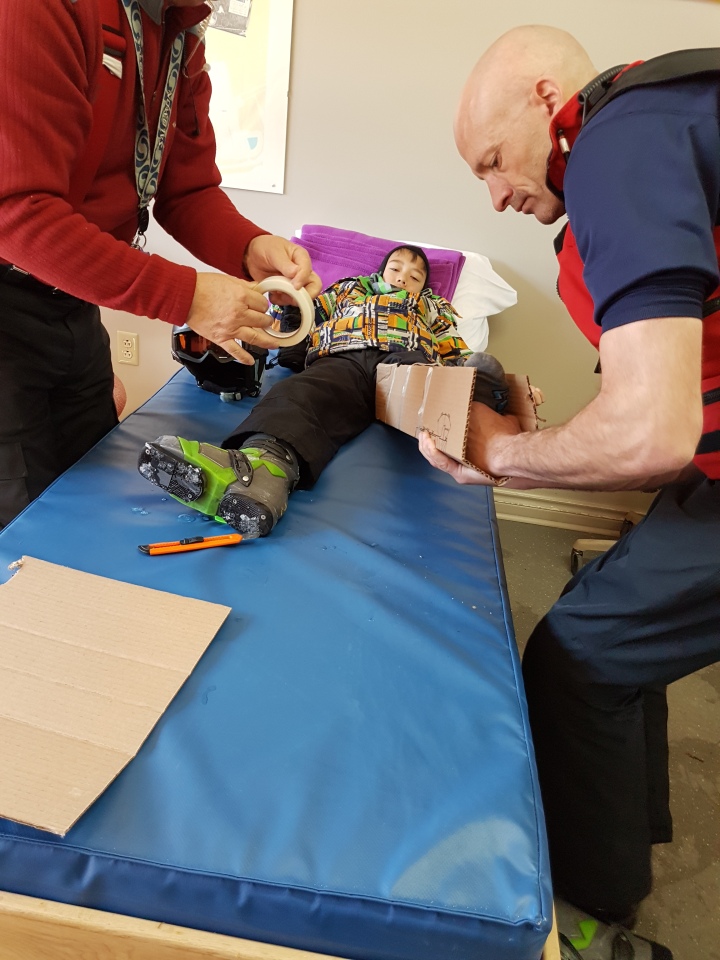 Hospital?  They never did tell me what the deal was.  All I knew was that my son fell, and he had a contraption on his leg. I asked the medic how urgent was it that I had to go the hospital…because I had like 4 other kids skiing… priorities, right????
I guess they don’t want to tell you the exact truth, in case you panic… but really they are never 100% sure anyways.  Besides, they can’t diagnose.

Being the nurse that I am, I asked if there was a deformity… “a little” he said…..  GAH !  This meant hospital for sure.   Ohhh how I hate ER’s.

We opted to go to a walk in clinic and leave my mom with the other kids so they could finish out their skiing.  I went to the walk in with my son and my six year old daughter.  Three hours later, tibia fracture it was.  Fabulous. 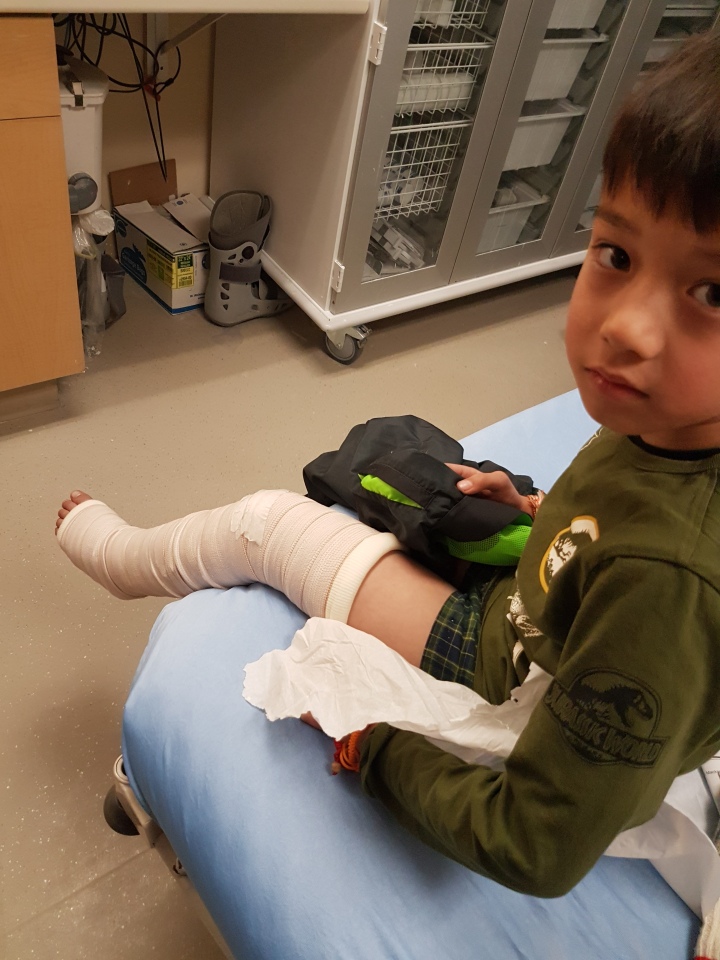 My most active child, my most needy, most difficult child to entertain..  now handcuffed to the couch….. ugh.
The most difficult part was seeing him heartbroken that he could not finish out his hockey season.
March 17th.  My son now wonders why, on a supposedly “lucky” day- was very unlucky for him.

It happens.  Be fortunate that it was “just” a broken leg.  Kids don’t get it.  It was not like he was a beginner skier, or that it was too difficult a hill.  He has gone that three times.  He has skied over three years. It was just not the best of luck.

It is going to be a long, long 6 or more weeks. 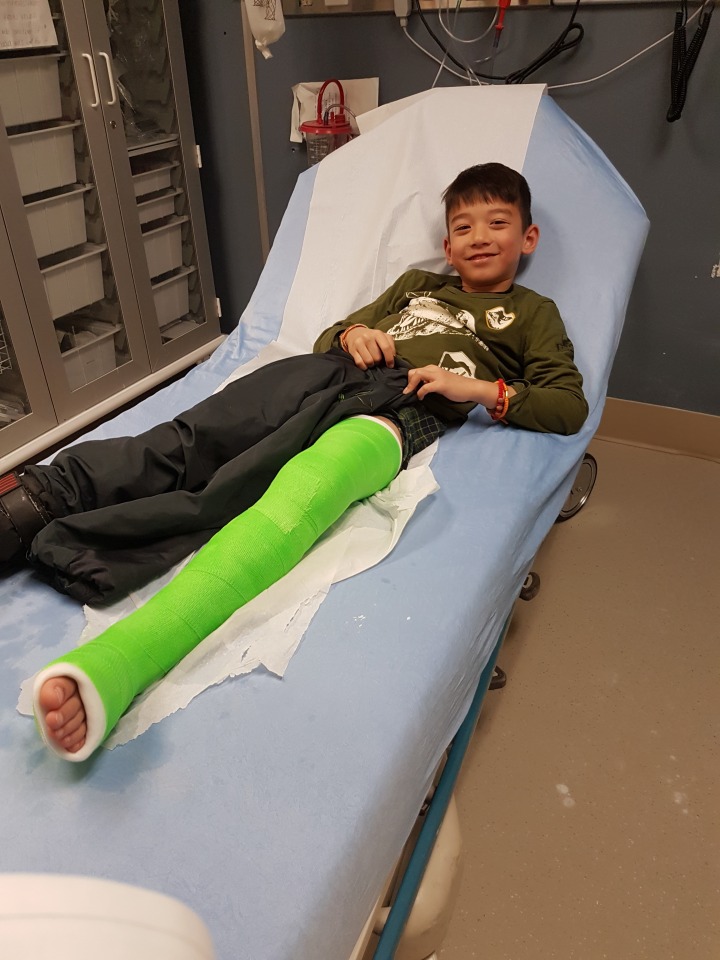